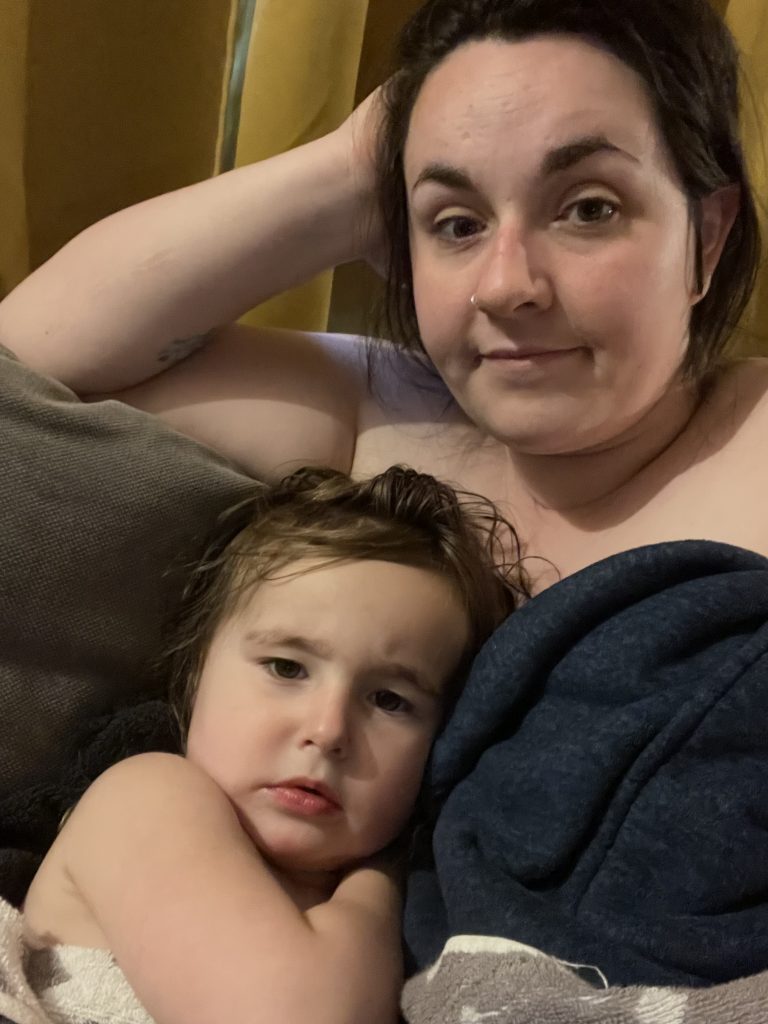 A weekend of sickness with twin toddlers

The last few days in my household have been rough. Thankfully I think we’ve got through the worst of it now, but it’s been the most trying episode of sickness we’ve experienced to date, and it’s made me incredibly grateful for our usual health and wellness!

On Friday, both twins were sent home from nursery within a few hours of each other with suspected chicken pox. They each had a couple of spots, and there had been a few cases going round, so it was a sensible conclusion to come to!

The twins were well in themselves and over the next 12 hours, there was no sign of any more spots. I asked around about the best remedies and ordered a few things in, just to be prepared anyway!

Come bedtime, Twin One was her usual self, but Twin Two was a little lethargic – we put him to bed and thought that was that. Alas, it was only the beginning. He woke up and was sick. We showered him off, gave him water and lots of cuddles, and put him back into fresh bedsheets. Not five minutes after he was in his fresh sheets, he vomited again quite spectacularly. Luckily, we had another fresh sheet so gave the bed a quick change and mopped the boy down again.

Once more, he was sick, and this time we were out of fresh sheets. At this point, I grabbed all the clean towels I could find, and made a towel sheet on my bed where I could keep a close eye on Twin Two. Twin One was happily snoozing at this point, totally oblivious to the drama around her.

In his hazy state, I managed to get some water down Twin Two, but it must have gone down too quickly, because within a minute or two the whole lot came back up again in the most projectile way imaginable. My effort to protect the bed with towels was laughable at this point, and every single bit of bedding now needed changing and I needed a good bath.

I ended up making him a floor mattress right next to my bed overnight, with a flask of water on hand. Luckily, there were no more major vomiting incidents in the night.

In the morning the vomiting has subsided, but Twin Two was still lethargic and generally under the weather. He tends to cling to me like a koala when he’s poorly, and he didn’t really want to let go of me at all! I suspect being vomited on, and being clung to by a sick child is what led me to contract the bug too, and I quickly started going downhill. I had a splitting headache and nausea so extreme that I started to wonder if I was pregnant again.

I went to go and have a lie down, but felt so poorly that I didn’t actually get up again for the rest of the day. My fantastic husband solo parented his way through the rest of the day like a champ. By bedtime, Twin Two was much more himself, and it looked like it was only me that was poorly.

The following morning we woke at 5am to the sound of Twin One being sick. I suppose it was inevitable that she would catch the same bug as the rest of us, but it was heartbreaking to hear her so upset about being sick and feeling poorly. Trying to explain anything to two totally non-verbal children is really difficult!!!

She handled the sicky episodes really well and was very brave, but I was trying my best to deal with everything while feeling like absolute shite myself. We spent most of the morning snuggled up together on the sofa wrapped in towels and watching TV. I persistently encouraged little sips of water, and tried to remember to do the same myself.

My husband took over in the afternoon and I headed back to bed for a bit to try and sleep some of the nausea and headaches away. At this point, we had collectively given up on most of our usual standards where housework was concerned. When you’re trying to function and look after children through illness, the very basic standards of being fed and watered are all that really matter, everything else can be dealt with at a later date!

By the end of the day, both twins were more or less back to their usual happy selves. I was feeling much better (although still not 100%) and my husband had clearly caught the bug, but thankfully had milder symptoms.

Now, the twins are fine, and both my husband and I are almost back to normal. I rang the GP and nursery today and the twins are clear to have their usual day in nursery on Thursday which will give us the chance to catch up on the neglected housework and get things back into ship shape!

The whole experience has been hard, and I’ve been trying to juggle work around the situation. As a freelancer, I don’t get sick days so need to do my best to carry on under any and all circumstances. It’s hard, really hard, to work, look after sicky children, and yourself.