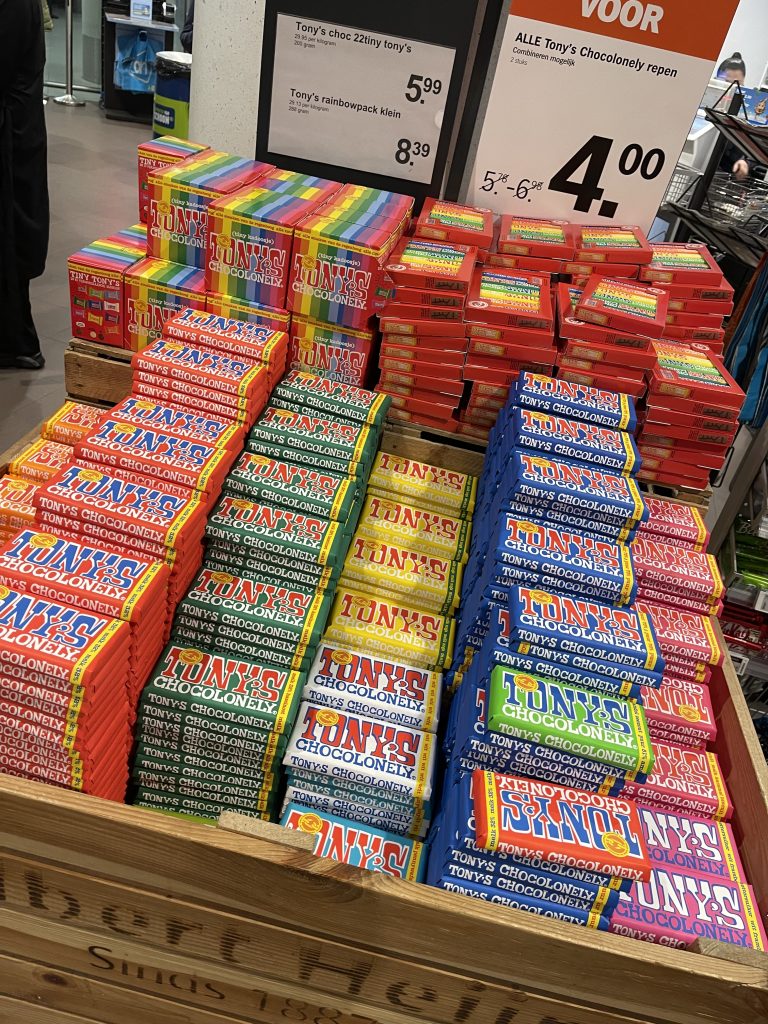 Ethical Chocolate in the run up to Easter – 2022

It’s been a while since I wrote about ethical chocolate, but as everyone knows, it’s something I am very passionate about. I had the pleasure of visiting the Tony’s Chocolonely headquarters, superstore, and café in Amsterdam last week, so it’s a topic that’s been on the forefront of my mind over the past few days.

As we are approaching Easter, the supermarkets, petrol stations, and corner shops of the UK are filling the shelves with Easter chocolate. Since the chocolate industry is monopolized by just a few big companies (Cadbury and Nestlé, I’m looking at you), 99% of what you find on the shelves is cheap and unethical.

The Problem With The Chocolate Industry

The big companies in control of the industry have openly come out and said that they cannot trace their chocolate from bean to bar, which means there is more than a reasonable chance that the process involves child slavery, exploitation, and unfair wages. This is the reason why you can buy an Easter Egg in the shops for just £1. I know we all love a bargain, but at what cost? Are you still happy to buy the £1 Easter Egg knowing that it’s a product of slavery and exploitation?

Slowly, the general public are becoming more aware of this issue and incremental changes are being made due to public demand, but the changes aren’t happening nearly quickly enough.

Ethical Dutch company Tony’s Chocolonely are fighting for big changes within the industry, and they are starting to see some real success. They have used clever marketing on multiple occasions which has opened people’s eyes to the horrors of modern slavery in the chocolate business. I wrote about their Christmas advent calendar which caused a bit of a stir, and last year they took on some of the big chocolate companies in the supermarkets, which resulted in Tony’s products being pulled from the shelves but ultimately started to bring public attention to the problems at hand.

This Easter, if you want to enjoy chocolate that’s ethical, steer clear of Cadbury’s, Nestlé, Green & Blacks, Hotel Chocolat, and supermarket own brands. Be especially careful of brands like Hotel Chocolate and Green & Blacks that have been accused of ‘greenwashing’ their target audience into believing that they are far more ethical than they actually are. Instead, find truly ethical alternatives. Tony’s Chocolonely have produced some Easter themed treats that can be found in the UK, and Cocoa Loco and Divine are also good ethical options. You can find all of these options both in some supermarkets and online. Some chocolate is being rolled out under a Tony’s scheme, meaning it’s a reasonable ethical alternative. These bars are identifiable by the small round yellow and orange ‘break the chains’ logo that you can find on the packaging.

If you want to delve deeper into this issue and see just how ethically produced your favourite chocolate is, the Ethical Consumer magazine often run comparative articles covering chocolate, and they have some interesting information available online to subscribers.

As most people reading this probably know, I work closely with the Babipur team – Babipur is a one-stop ethical shop, and they sell chocolate. Everything you find on the site is ethical, so if you don’t have time to take a deep dive into a particular company’s ethics, you can be safe in the knowledge that the Babipur team have already made sure everything they sell meets the mark.