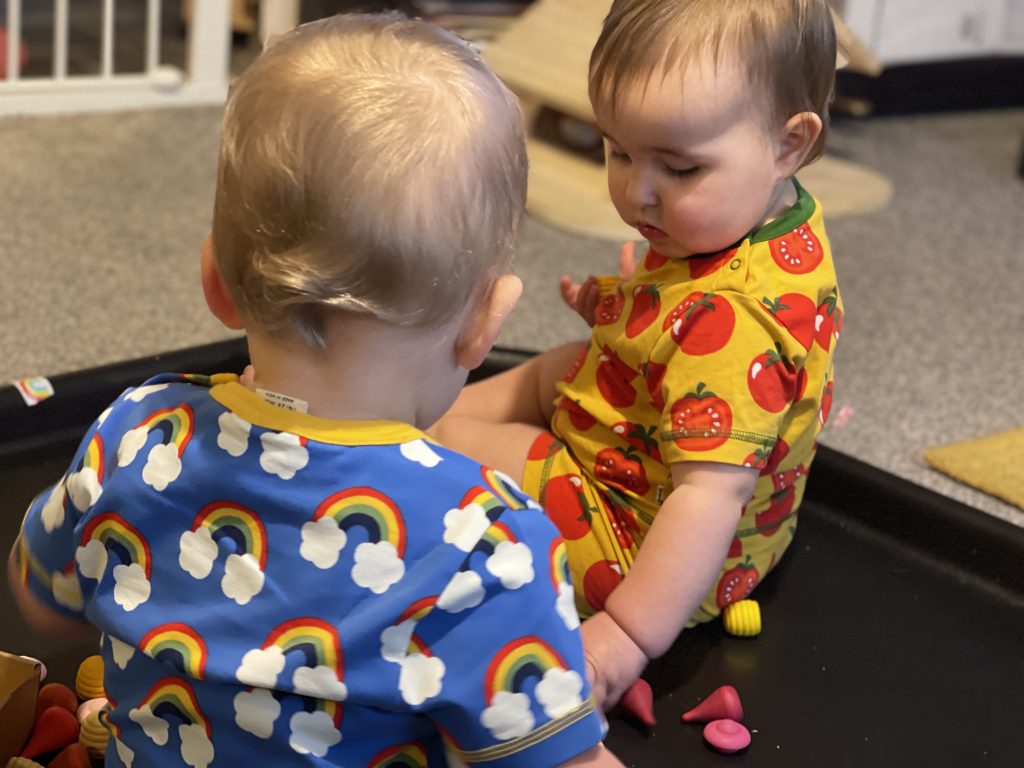 Think about it, your twins have shared your womb, and they’re used to being squished up right next to each other. On the day my twins were born, they were horribly unsettled unless they were in a cot together. They’re 16 months old now, and have shared a cot since birth. I’m fairly sure that the cot-sharing has actually been a huge factor in us being able to establish an excellent sleeping routine. If they wake during the night, they can see they’re not alone, and go straight back to sleep.

I see hundreds of twin parents in Facebook groups and forums asking about the right time to separate them, but honestly, there’s no set ‘right time’ – it depends on what your twins are like, what they want, and the space available. Some parents decide to separate their twins while they’re still babies, others when they start primary school, and some when they start secondary school! I know a twin mum in town who has boy girl twins who are ten and share a double bed!

Bottles are a pain to store. They don’t stack and take up loads of room, so I refused to get any more than I absolutely needed. I breast fed as well as bottle fed when the twins were small, so that meant I didn’t need too many to start off with. A good washing up and sterilizing routine meant that I never needed that many bottles, even with two babies!

I have more toys than I can shake a stick at, and many of them are duplicates of each other but in blue and pink, because people thought that would be a cute gift! While yes, little blue and pink versions of everything IS pretty adorable, you simply do not need two of every toy. My twins have always shown interest in totally different toys from each other and I have a lot of things that have never been played with. I’d thoroughly recommend just buying one toy, and if both your twins are interested in it, THEN get another one, if they can’t be persuaded to take turns.

This one isn’t for everyone, but in the interests of green living and sustainable parenting, it’s worked for us. With boy girl twins, I generally tend to buy gender neutral clothes that they both wear! We favour scandi brands like Maxomorra and Duns, which are great for fitting cloth nappies into, and the prints are all incredibly unisex! If you have same sex twins then this is even easier!

Apart from a few cute coordinating twin sets of clothes, this approach works really well for us, and has saved a lot of space and money.

(All this being said, I’m really partial to dressing my daughter in the more ‘boyish’ prints and passers by often assume she’s a boy, but I really don’t give a hoot, she looks cute.)

This is the most important one to remember. Just because you have twins, doesn’t mean that everything will be twice as hard. As a twin mama, it’s amazing how I’ve adapted to work around having two babies, and I think parents of multiples are a lot more capable than they think.

Sure, having an extra pair of hands around can be really helpful, but you might actually find that it’s far easier getting things done yourself, your way, because you’re so used to what you’re doing!