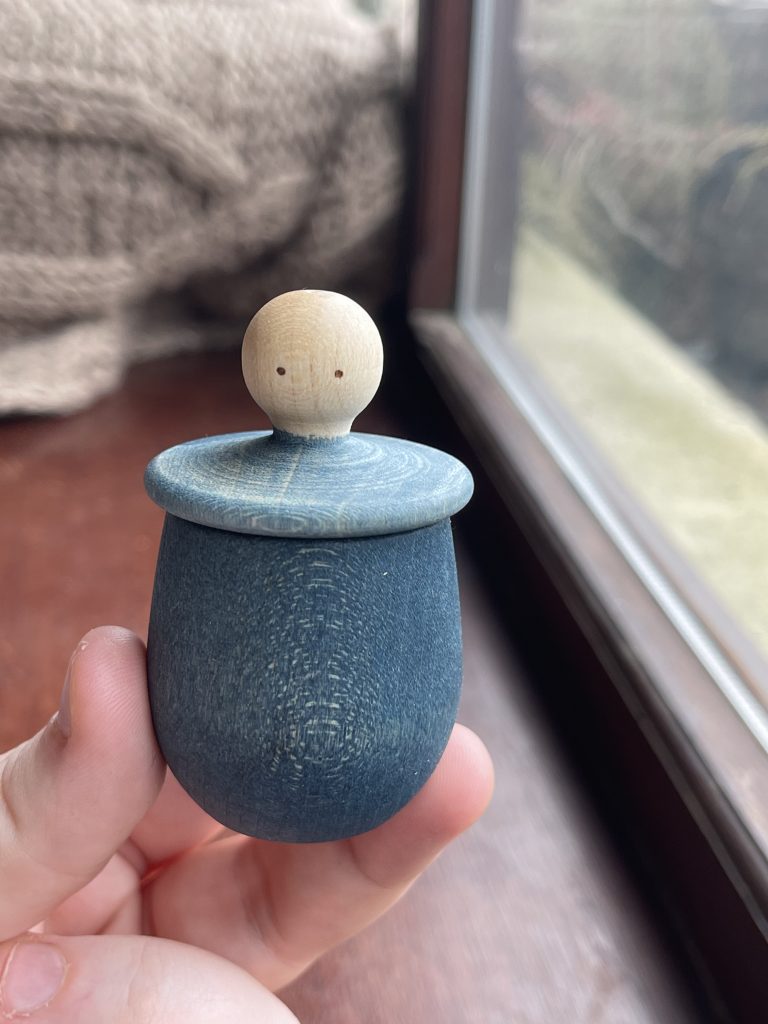 I had an exciting delivery today – some new Grapat! For those who don’t know, Grapat is a beautiful Spanish company that make open ended wooden toys, designed to inspire imaginative play. While they might not look like much to grown ups, they open up whole worlds to little minds.

The most well known toys from Grapat are probably their mandala pieces (I’ve written about them here), but when the company announced that they were launching some new bits, I decided to steer away from the mandala pieces (for now) and get something different! I opted for a ‘Little Things’ set which is a simple, but incredibly well thought out toy. I chose a blue set, and it arrived today!

‘Little Things’ comprises of two pieces; a small wooden pot, and a lid. The lid has been very cleverly designed with two handle-like bobbles on either side, one of which has eyes, making the whole set look like either a little creature, or a simple pot when put together. The most brilliant feature of the toy is that the lid component is a spinning top that spins well on both ends!

When I unboxed ‘Little Things’, I had assumed that my 16 month old twins wouldn’t be old enough to show much interest yet, and this was a toy that I would appreciate alone until they were a little older. It turns out that I was wrong, and before the toy was even out of the box, both twins wanted to play and explore!

My son was absolutely thrilled to watch the lid spinning about, and enjoyed catching it and popping it back into the pot. My daughter also took a liking to the lid and insisted on clutching it and waving it about while bumbling about all morning. I’m now resigned to the fact that I’ll probably have to buy another ‘Little Things’ to avoid conflict. Funnily enough, this is the first toy that both twins have actually shown an interest in – it’s usually one or the other!

My husband came to see what all the excitement was about and claimed he didn’t see why we were making such a fuss over a little pot and a lid. However, when he thought I wasn’t watching, he spent five minutes playing with the spinning top lid!

And there it is, a lovely little toy, great for children of all ages to inspire imaginative play.