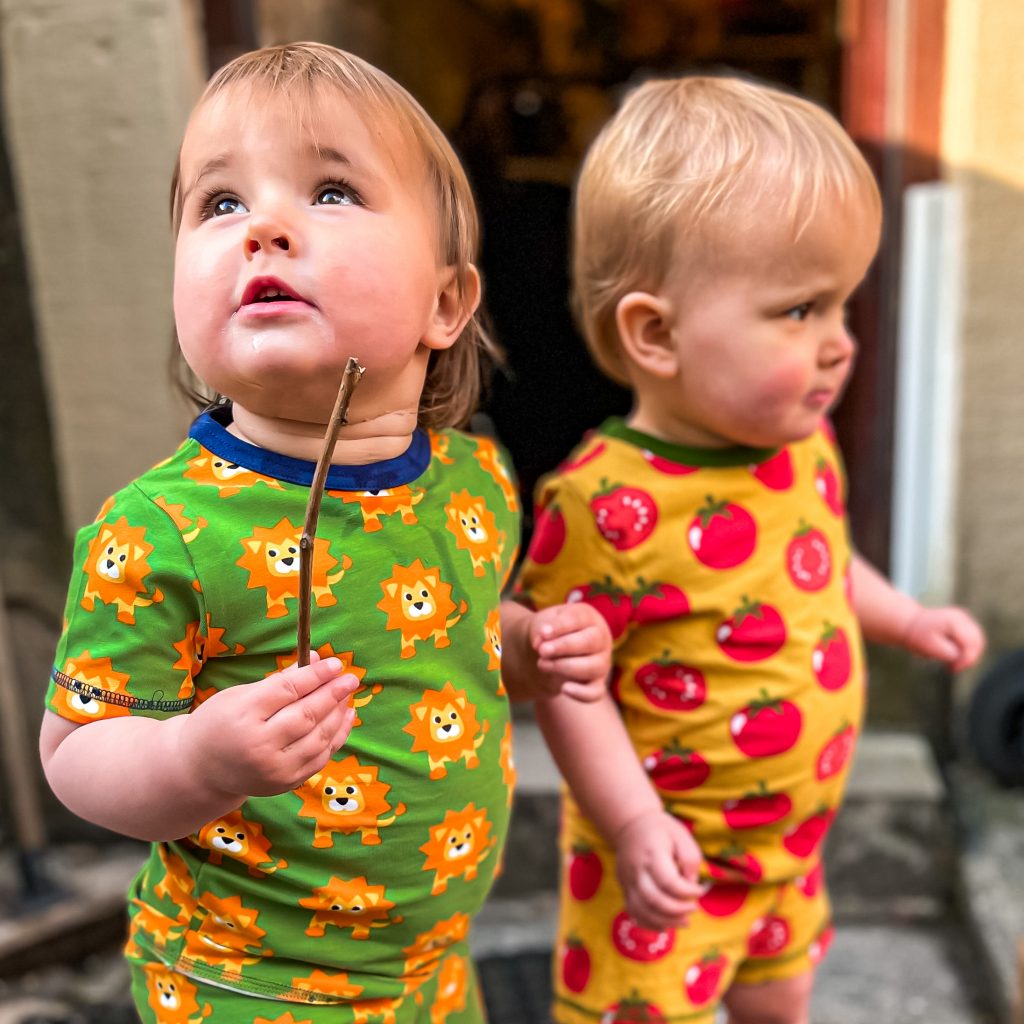 Our Routine at 18 months

I’m going to preface this post by saying we had no notion of routine until the babies were 12 months old. We always aimed for a 7pm bed time, but that didn’t always happen, and meal times were at a different time every day! I’m sure that kind of extreme-flexibility would send some mums into a head spin, but it worked for us so we went with it! Why fix what’s not broken!?

So here we are at 18 months, and we now have some semblance of a routine. It’s always a bit different, but it usually goes something like this;

This is probably the most unusual part of our routine. I don’t wake the babies up, I just wait for them to wake up, and they are my alarm clock! I wake up to them chattering and babbling, and leave them to it for a few minutes while I get dressed.

I take them downstairs and pop them straight into their highchairs with the breakfast that I’ve prepared the night before (usually toast and a fruit salad). I make myself a quick coffee and drink it with the babies at the table.

1000 – get everyone dressed and free play

I prep clothes (including my own) and take them downstairs the night before depending on what the weather forecast tells me: I thoroughly recommend this to twin parents, it saves a weirdly large chunk of time!

After everyone is dressed, I’ll make sure there are a few different things out to okay with and then just sit back and watch the masters at work! We operate a vaguely Montessori toy system – I have a very rough toy rotation system, and things are organized into boxes, bags, and trays by activity. I really like this approach, although in reality, both babies know where the rotation stash is, so sometimes they get everything out and it’s chaos!

Although I’ll watch them play, I tend to take the opportunity while they’re occupied to have a second cup of coffee, something to eat, and hoover up any toast crumbs in the kitchen.

Snack time usually consists of either rice cakes or raisins, which I put on the baby sized table, and inevitably somehow ends up all over the room nonetheless. There are usually wooden toy animals all over the floor at this point, so I’ll do a quick tidy while they’re eating their snack.

After snack, we usually all have some cuddles on the sofa with the TV on. We will quite often look at some books together at this point now. My son picks the books he wants to read and brings them to me where he will then the pages. My daughter will sit quietly on my lap and listen, lifting any flaps.

I’ll start preparing lunch and let both babies hang out in the kitchen with me if they like at this point. We have a baby sized broom, mop, duster, and dustpan and brush that live in the kitchen – these tend to provide some entertainment, although tins of beans and random potatoes are also firm favourites.

Lunch usually consists of whatever What Mummy Makes recipe I’ve batch cooked with some salad for the babies, and leftovers or a big salad for me. Don’t be fooled though, I have the rare ability to make salads that probably aren’t all that healthy (think lots of walnuts and goat’s cheese)… Around this time every day I realise that I haven’t drunk enough water and proceed to down about 3 pints and make myself feel sick.

After lunch, I do a quick tidy up and start getting everyone’s coats and shoes on. With twin toddlers, you’d be surprised how long this can take, especially when you can only find one left shoe and a coat three sizes to small.

We don’t always go out, and on those days we just repeat our morning routine with a structured activity or two thrown in, and perhaps a roam in the garden of the weather permits.

Wherever we go, I try and stop in the park on the way. There are lots of quiet places where I can get both toddlers out to stretch their legs and have a really good run around. I have to be on my A-game at all times because they tend to run in opposite directions to each other. Sometimes we will have a play in the park if it’s not busy – being by myself I need to make sure I can see, and be close to both toddlers at all times which is why I’ll only go in when it’s quiet.

After the park there are a few places we sometimes go on to. There are a couple of supermarkets in our town which we quite often go to – not because we need anything, but because they provide some different sights and smells! Our local market is also brilliant for this exact reason. Sometimes I’ll buy a treat and we will share it on a park bench somewhere.

If I’m feeling adventurous, I’ll get on a bus or train and go somewhere further afield. Manchester is under half an hour away by train, and there are all kinds of places to explore via the local bus routes.

There have also been a few times when I’ve felt particularly energetic and decided to take us all on a hike. These have probably been the most rewarding outings for me, although it’s hard work pushing a double buggy on a hike up a hill!

We will usually be home by 1630 when I’ll play a bit with everyone before making a start on dinner. My husband gets in from work at about 5pm, and dinner is usually on the table shortly afterwards. We probably eat the same things as a family about five days of the week. It’s a pretty early dinner for my husband and me, so on these days we will probably have a light supper before bed.

I give the babies each a bottle of milk, and tidy as much of the downstairs as I can while they’re drinking it. Next, my husband and I shepherd them upstairs where we give them a bath three times a week, and get them ready for bed.

After they have their pyjamas on, we take a baby each and brush their teeth, before putting them in their cot. We then take it in turns to read a bedtime story before lights out. The aim is to have lights out somewhere between 1900 – 1930.

After bed – prep for the next day

Once the babies are asleep, I start prepping for the next day. It probably takes me half an hour total – I prep breakfast, make sure there’s something for lunch, get everyone’s clothes ready, and put on any laundry that needs doing. After that, my husband and I get on and enjoy our evening!

I’ll end by saying I know how lucky I am that this all works for us. Both babies are fantastic sleepers – they sleep through the night! We don’t usually have any daytime naps which means we have the late morning starts. Honestly, this works very well for me, and on the occasions where we have a nap, I’ll adjust bedtime accordingly. Things are very different on the weekends when my husband is around, but I thought this might be useful for someone to see how we manage things during the week.